The hymns of the early Morning Prayer were coming from Jami Masjid. The emperor of Hindustan, the great Akbar was seated towards west direction, at the direction towards the holy Kaaba, Mecca for Namaj. After finishing the Namaj, now morning bell was rang from the Nahabatkhana (Chahar Sukh). The beat of starting of a day was promptly realised in Fatehpur Sikri. Sound of business was wafted over. Khan-e-Khanan Abdur Rahim was busy with the translation of Tuzuk-E-Babri in Persion language, the language of the court. Tuzuk-E-Babri was written by the emperor Babur, founder of the Mughal dynasty in India. Babur wrote it in Chaghtai Turki language. Prince Selim, Murad, Daneyal and other royal kids were now busy in the royal moktab with Molla Badauyni. They were seated quite calmly and listening a piece from Malfujat-E-Taimuri narrated by the great scholar Baduyni. In another room of the Moktab a handful of scholars assimilated. Among them, Faizi, Abdul Kader, Madhusudan Swarasati, Damodar Bhatta were name a few…..

Well you must be hoping that I am going to narrate you another historical fiction like Alex Rutherford…sorry that’s not going to be…let’s move straight to the monumental Buland Darwaza of Fatehpur Sikri.

Our cab driver whom we used to call “Singhji” informed us that he would take us directly beneath the Buland Darwaza and said that while coming back we would need to board a “Municipal Corporation” minibus from the main ASI ticket counter at Fatehpur Sikri fort complex to reach the parking place which is located down the hill near to the tourist bazaar. He wished us a happy day ahead and left for the parking place.It was a moment of pride, honour and astonishment. 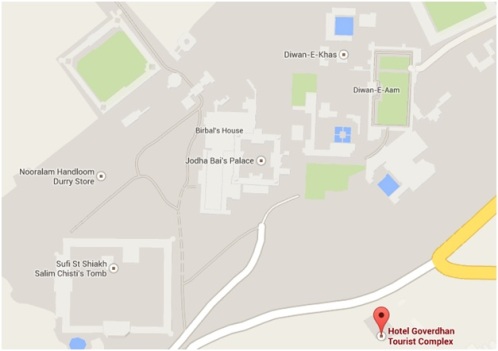 We were standing below the majestic Buland Darwaza with its monumental mammoth structure and the innumerable red sandstone stairs leading to the great arched gateway. We knew there was something so heavenly in this place – perhaps one of the holiest places in our country! We were more than anxious to pay our respect and homage to his Holiness Salim Chisti. This was the moment to seek His blessings for a good life.

1601 AD, emperor Akbar had returned from his conquest of Gujarat. The emperor’s victory was made immortal by the construction of the magnificent 52m high and 35m wide lofty red and buff sandstone gateway the “Buland Darwaza”. Apart from the Badshahi Darwaza, the Bulan Darwaza forms one of the main entrances to the Dargah complex of his Holiness Salim Chishti and the Jami Masjid. The monument is located on the top of a hillock and is led by a huge staircase leading to the Dargah complex. 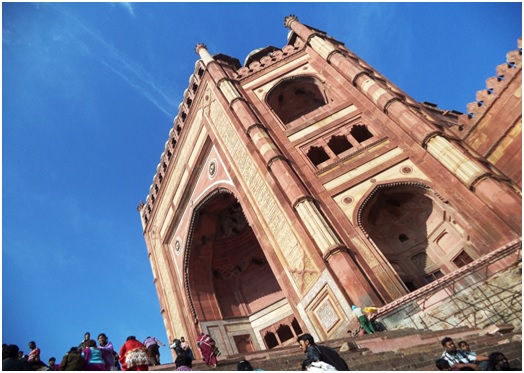 What a grand sight it would have been when the emperor Akbar had climbed the amazing 12m high steps of Buland Darwaza on his royal horse amidst pomp and grandeur after his Gujarat conquest. The gateway’s magnificence was the symbol of Akbar’s monumental attitude and political musculature. The monument is semi octagonal in shape with a large central pishtaque (arch) leading to the entrance of the Dargah courtyard. This central arch lies in the middle of three semi-octagonal projecting sides containing smaller pishtaque or arches at the three tiers. The roof of the Buland Darwaza is covered by a perforated paraphet containing kiosks and chhatris. 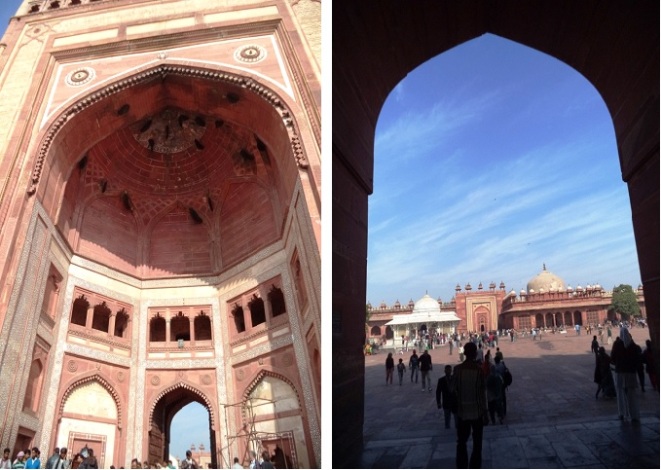 The Hallway of Buland Darwaza leading to the Dargah Complex

The central arch leads to the octagonal hallway containing an arched doorway opening northward into the courtyard housing the Salim Chishti Dargah and the Jami Masjid. The hallway is decorated by arched pavilions on the first floor with a domed roof having octagonal arched walls leading to the domed ceiling. The overhanging honeycombs on the domed roofs are fascinating to see. Though the hives look quite awesome, but most of the local guides advise tourists to stay away from disturbing the bees.

We left our shoes outside the Buland Darwaza to a shoe keeper and entered into the gigantic courtyard that lay ahead of us. In the left we had the Jami Masjid, immediately to our front we had the shrine of His Holiness Salim Chisti. To the right of this all white marble monument we could see the Jamaat Khana & the Zanana Rauza. The enire paved courtyard was the scene of busy tourist activity. While many tourists were busy wandering here and there, some were eagerly enjoying the architectural marvel of the Dargah complex. Some of them were engaged with their guides, minutely listening to their stories regarding the history of Fatehpur Sikri. Obviously there were hawlkers. They were flocking around tourist parties in order to convince them for purchasing mementos and gift items. We decided to leave the crowd assembled particularly near to the centre of the courtyard and moved towards our left where the Jami Masjid was located with its artistic magnificence.

The Jami Masjid is one of the most fascinating monuments at the Salim Chishti Dargah complex at Fatehpur Sikri. It was built in the year 1571-72 by his Excellency, Emperor Akbar as a tribute and homage to the great saint Shaikh Salim Chishti (who passed away on 14th February 1572). The monument is spread over 133m to the north-south and 165m east-west. 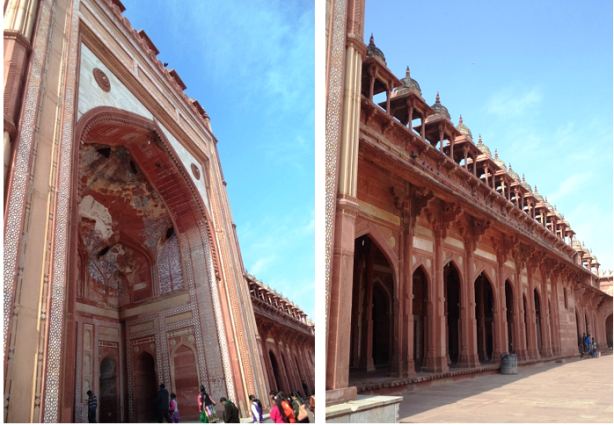 Main Entrance and the adjoining hallways of the Jami Masjid 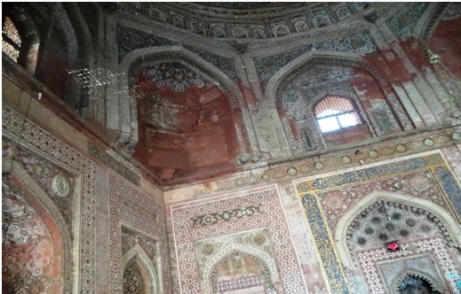 The Central Prayer Hall of the Jami Masjid

The walls bear the faded colourful remains of once exquisitely and elaborately painted hall with complex floral and abstract geometric designs. The architectural designs inside the prayer hall resemble the traditional Hindu designs popular in Gujarat which is perhaps the first of its kind in any mosque. Here lies the greatness of Emperor Akbar who dared to rise above religious barriers creating a role model for religious tolerance and harmony.

Designs of the prayer hall 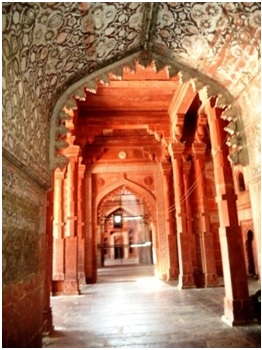 The hallway of the Jami Masjid 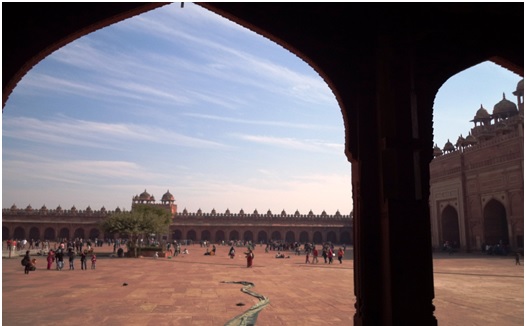 The Dargah of Salim Chishti

Our next destination was the Dargah or the tomb of Shaikh Salim Chishti. We observed that by now the crowd had dispersed and probably the tourist party had moved out towards the Badshahi Darwaza. We thought this was an opportune moment to have our visit at the Dargah and offer prayers to the great Sufi Saint. 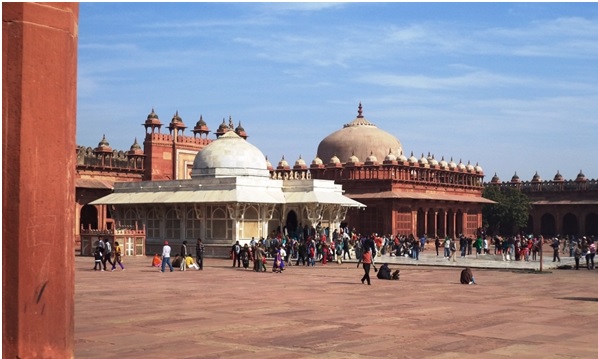 The Dargah of Salim Chishti

The Dargah of Salim Chisti was built over his meditation chamber, after his death in the year 1572. The all white marble makbara was completed by the year 1580-81. The square shaped white marble mansion attracts the gaze of an art lover by the sheer beauty of its simplicity and the aura the exquisite “jaalika works” curved on its walls. The close view of the Dargah immediately brought in a sense of fulfillment and peace amongst us. We were immersed in a spell of divine tranquillity the moment we stepped inside the monument.

According to noted archaeologists and historians, the tomb mansion was partially made of white marble with a red sandstone verandah and dome which was later renovated during emperor Jahangir’s rule into the all-white marble splendor that we can see now. It is said that Jahangir’s foster brother Qutubuddin Kahn Koka was instrumental in bringing the marble jaalikas on the outer walls of the mausoleum in the year 1606.

Today the mausoleum presents the symbol of religious unity and integration. People from all over the world with different religious, socio-cultural background come to the Salim Chishti Dargah for offering prayers and seeking the blessings of his Holiness. This religious and cultural integration was pioneered by his Holiness Shaikh Salim Chishti Himself and rightly passed on to his beloved disciple emperor Akbar. 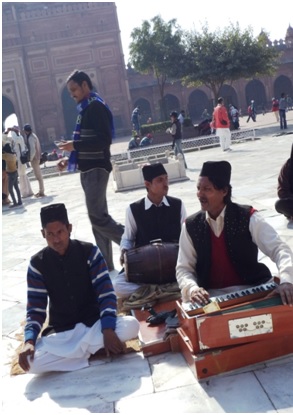 Our brief rendezvous with the Sufi Artists at Salim Chishti Dargah

Just ahead of the main entrance to the tomb on the courtyard we were mesmerized by the Holi Chants sung by a group of local Sufi artists. This is one of the lost arts which is slowly on the verge of slow extinction. Who knows whether any of the ancestors of these Sufi artists might have had enchanted the emperor Akbar during his visits to the Salim Chishti Dargah? 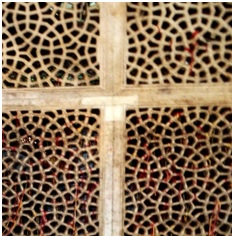 One of the most interesting things that captured our attention was the immense faith people have on this Holy shrine. People believe that by tying a piece of holy thread (Dhaga) on the Jaalika screens would not only fulfil their dreams and aspirations but would also lead them towards achievement, fulfillment and happiness. Every pilgrim, whatever their background, religion were offer their prayers and seek the blessings of his holiness Shaikh Salim Chishti.

This tradition was started by Akbar and is still in vogue. It is said that after having so many wives and concubines, the emperor remained childless until he was blessed by his holiness Shaikh Salim Chishti that he and his wife Jodha Begum would give birth to a prince who would become the next Mughal emperor. We entered the shrine after passing through the narrow doorway and were led in through two rows of Jaalika screens. 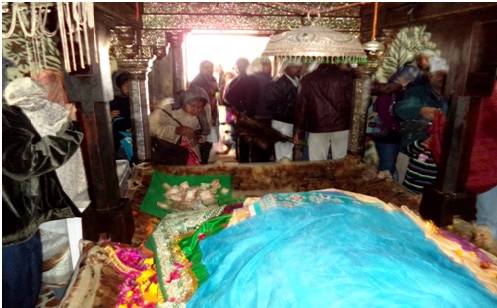 Pilgrims seeking the blessings of His Holiness Salim Chishti

The aura inside the tomb was out of the world. Dim light and the sweet fragrance of agarbattis (incense sticks) and atar create a spell binding aura of peace and tranquility. We could feel the pervasive presence and blessings of His Holiness in the small hall housing his final resting place. Pilgrims around us offered their prayers by spreading a “Chadar” and flowers on the cenotaph and seeked the blessings for themselves and their family members.

One of the amazing things we had witnessed here was the painted spandrels inside the Dargah. Each spandrel depicts the display of one of the finest artistic works pioneered during the Mughal era. We were spell bound by the painted walls and the out of the world designs on the ceiling of the inner dome. 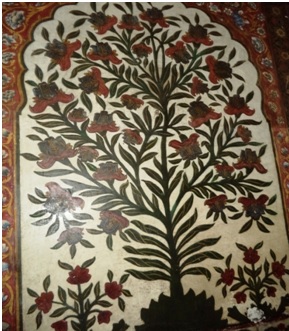 Coming to the Jaalika screens at the Dargah, it can be easily said that they are perhaps one of the best architectural works ever created during the Mughal era. 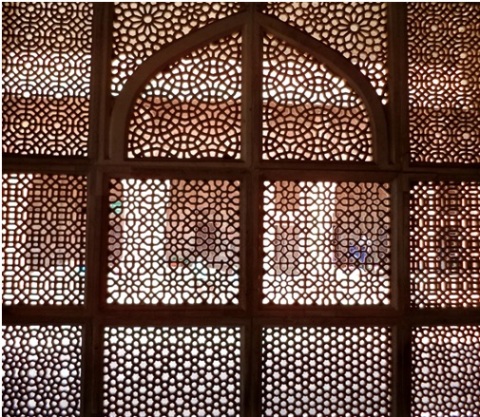 The screens offer a filtering effect on the impeding sunrays creating a mysterious dim-shadowy, cool aura inside the Dargah. If carefully observed, the screens bear exquisite floral and geometric (hexagonal) patterns unique of their kind. After seeking the blessings from His Holiness we turned left to enter the Jamaat Khana and the Zanana Rauza.

The Jamaat Khana & the Zanana Rauza

The red sandstone mansion lying east to the Salim Chishti Dargah is used as the Jamaat Khana or the “House of Common Religions”. Historians are of the opinion that the disciples of Salim Chishti used to assemble in this mansion for discussing talks on various religious issues. 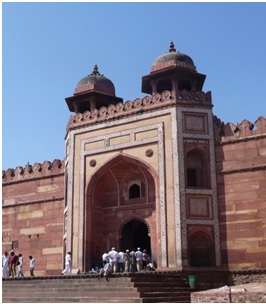 The gate is 13m wide and 18m high. The adjoining rooms around the Badshahi Darwaza inside the Dargah complex were probably used as the residence of the mullahs and other religious men. We walked towards the Imperial Palace complex keeping the Badshahi Darwaza on our left…… 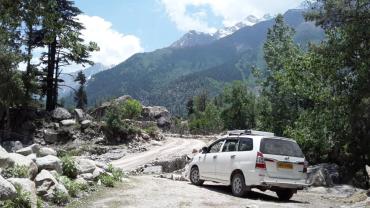 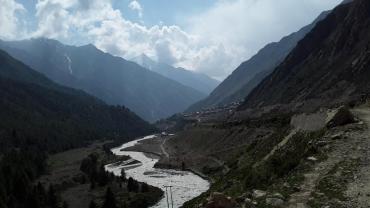 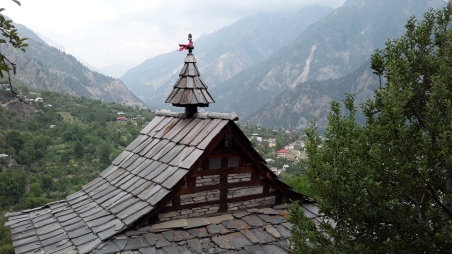 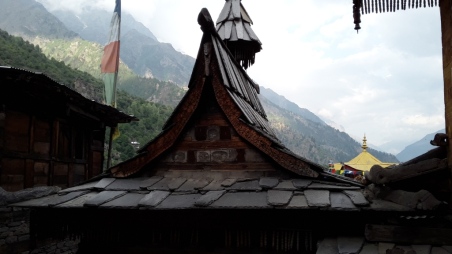 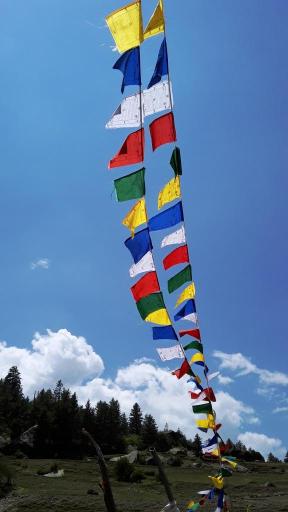 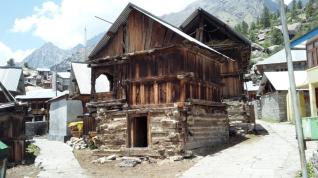 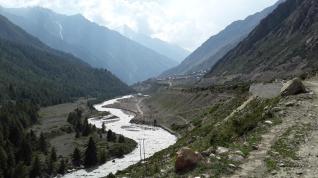 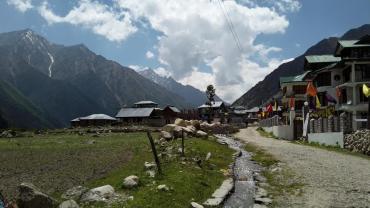 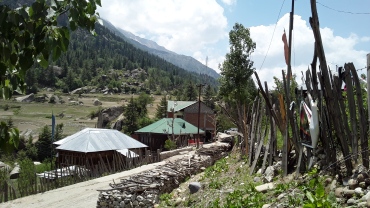 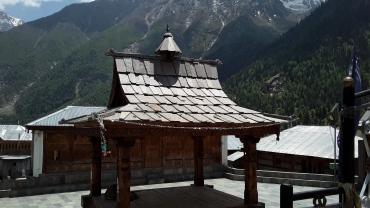 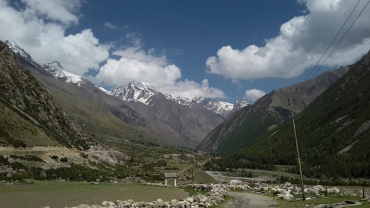 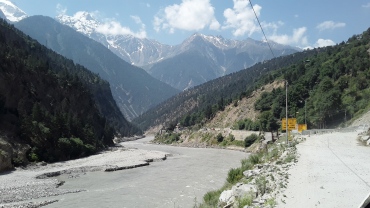 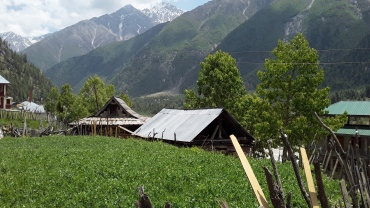