The ship was miserably carried away by the furious tornado and the sailors knew well they were well away from their route to Rangoon. Captain James Stewart was not dejected like the others who had lost all the hope. Suddenly one of the crew came running in to his cabin, shouting that a huge black geometric figure could be seen in the distant horizon. The Captain took his binoculars, “God be praised! The black geometric figure in the distant horizon was none other than the legendary Sun Temple of Konark in India. He knew by Gods grace atleast this time all would be saved……The Sun Temple of Konark had not only saved Captain Stewart and his crews’ lives but had guided thousands of sailors on safe track on the Bay of Bengal…

The Sun Temple of Konark

The Sun Temple of Konark

We had a long cherished desire to stand humble in front of the archaeological wonder – the Sun Temple of Konark. This winter the opportunity came running to us during our Puri Trip. Puri had always been the most beloved, comfortable and economical tourist destination for any Bengali family and the attraction never fades inspite of one visiting this amazing beach town even several times. We were on our way to Bhubaneshwar, Odisha’s capital from Puri by the tourist taxi which dropped us in front of the ASI ticket counter sharp at 10.30 in the morning. The day was chilly and the wind was getting stronger. Inspite of this there were a fair number of tourists ahead of us.

An ASI guide was leading a team of Japanese tourists’ way ahead of us. We obliged ourselves by carefully listening to his introductory presentation. Let me recollect the bits of the lovely presentation which would definitely enrich this writeup.

The Beginning of the Konark Sun Temple

The Sun Temple of Konark was built in the year 1250 by Raja Narasinghs Deva-I of the Ganga Dynasty. Yet inspite of completion it was mysteriously abandoned in the year 1536. The temple probably got its name from the Sanskrit words, Kona meaning corner and Arka meaning the Sun – and the temple as such was dedicated for the worship of the Sun god “Surya”. The gigantic temple was also known as the Black Pagoda in comparison to Sri Jagannath Temple being known as the White Pagoda. Probably the names were popular due to their typical pagoda like structure and due to their colour and appearance in the eyes of the Western Sailors travelling on ships in the Bay of Bengal. The temple is an epitome of the highest level of architectural mastery achieved in the Kalinga.

There is a mystery behind the abandonment of this majestic temple. One version of the popular story indicates that the temple was declared inauspicious due to the suicidal death of Dharmapada, the son of an artisan working at the temple. Some others say that the King Naramsimha Dev Some others have pointed out that the temple was ruined by natural calamities like earthquake, tidal waves from the ocean and even due to the curse of the Sun God.

Inspite of whatever happened in the past we were literally awestruck by the sheer magnificence of this gigantic monument which is total proudly declared as one of the World Heritage sites of the UNESCO.

Architecturally the main temple resembles exactly like a gigantic chariot with seven horses and 12 pairs of exquisitely decorated wheels lying on either side of the square shaped temple chamber. The temple lies over a huge elevated plinth, where the sides contain the magnificent wheels. The design of the temple resembles the typical chariot of the Sun God Surya, which is drawn by seven divine horses. The main entrance faces the east signifying the direction in which the Sun arises in the far-off horizon. 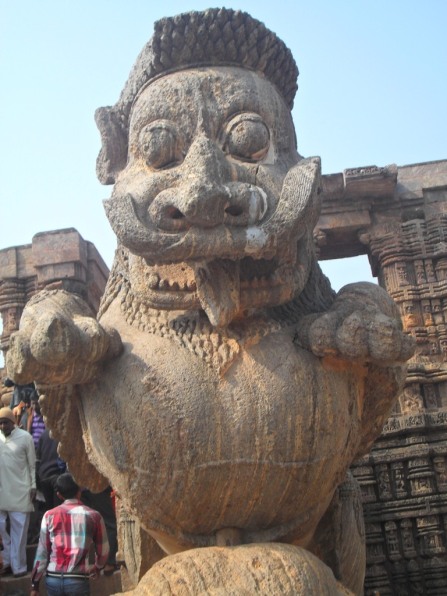 The gigantic lion standing on either side of the main entrance

The long staircase leading to the top of the plinth is guarded by the statues of two fierce lions standing over crouching elephants. The design of the lions bear architectural styles typical in Odisha (Kalinga Art).

The stone wheels of Konark Temple are the most amazing artifacts of architectural mastery. Curved out from blocks of stones and exquisitely designed by carvings – they form a master piece form of an art past compare any architectural achievements present in the known world.

Each of these twelve wheels symbolize twelve months of a year. If minutely observed each wheel itself can be interpreted as a typical sun-dial watch, where the spokes of the wheel depict accurate indication of time in the form of minutes, seconds  as well as day and night. This is something amazing. It speaks of the highest form of knowledge in science, astro-physics, art and architechture.

The very sight of the wheels would make any on-looker awestruck and we were no exception. A snap of these wheels had earned enormous accolades to several photographers in world class travel magazines and journals. Infact to be honest, these wheels themselves have become the true brand ambassadors of the Konark temple in mementos, post cards, travel books and magazines. 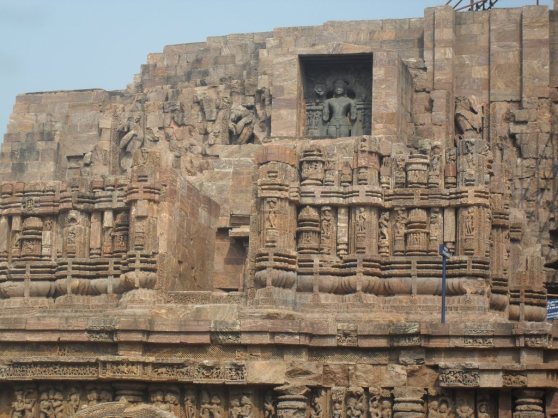 The incredible display of sculptures in Konark’s Sun Temple

The amazing pyramidal apex of the Sun Temple, Konark

The walls of the temple can only be described as a sanctuary of world class stone sculpture. Being from a non-arts background it was a real challenge to have a true appreciation of these marvelous carved statues. We thought how many years had been truly spent behind each of these masterpieces and how much artistic talent  had been engaged to accomplish this gigantic artistic mastery!! This was truly the spirit of the “Incredible India” – the Incredible India which you can only expect to see at the Sun Temple Konark, the Jagannath Temple, the sculptures of Khajuraho, cave paintings at Ajanta and the the Godly sculptures at the Kailash Temple at Ellora. Describing these magnificent pieces of art would be foolish. We leave their true appreciation to you – our readers. 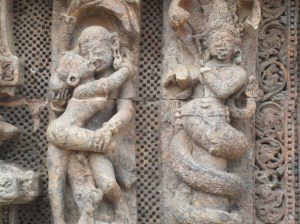 Portrayal of Kamasutra in the sculpures at Konark 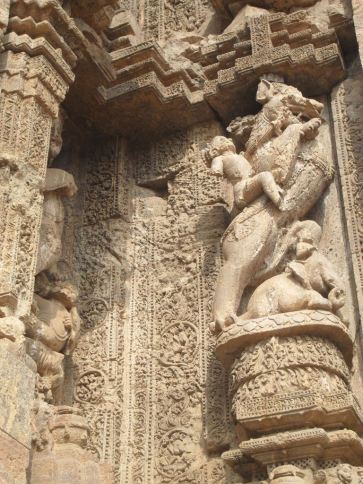 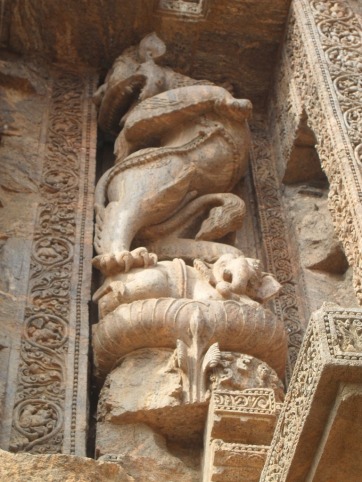 The amazing pillar sculptures on the walls of Konark Sun Temple 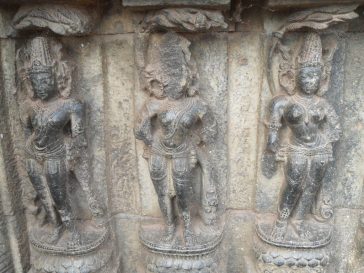 An amazing artistic feat which would be hard to ignore was noted at the top of the entrance to the inner sanctum (Garva Griha) of the temple (which is nowadays closed for the visitors). The minute yet detailed sculpture depicts the epitome of artistic mastery achieved during the 12th century AD by the then Odisha. 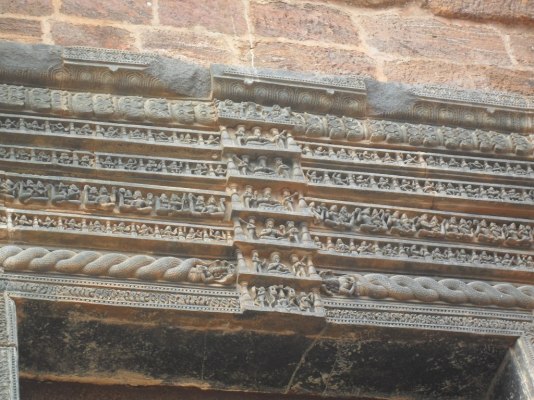 Well it was a difficult yet an adorable task to have a detailed appreciation of the precious sculpture works on the walls of the Sun Temple. We could do the best by only admiring and adoring the heavenly beauty of the amazing works. We moved to the adjoining garden lying to the right of the temple and was literally awestruck by the amazing elephant statue which had been the proud mascot and brand icon of Indian Tourism for several years. It was a proud moment to witness this magnificent piece of art by person. 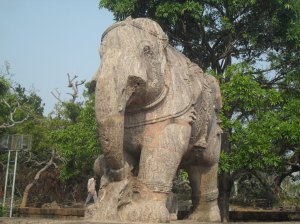 Konark’s one of the proud pieces of Art: The Elephant Statues

Konark had made a long lasting impression in our minds. It was too short of a time to enjoy and understand the mastery of the sculptures of the Sun temple. We had so many questions unanswered in our mind. The history of the temple itself was a mystery that had remained unexplored for so many ages. All in all, it was a proud and engaging day for mytravelnama to document Konark and present the same for our esteemed readers. We sincerely hope that you guys would definitely agree with us that Konark is truly “Incredible” and the true brand ambassador of our “Incredible India”…. 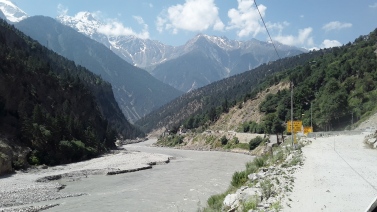 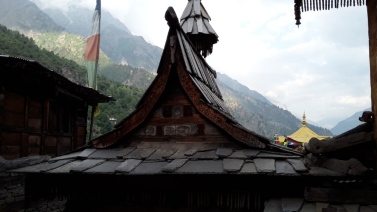